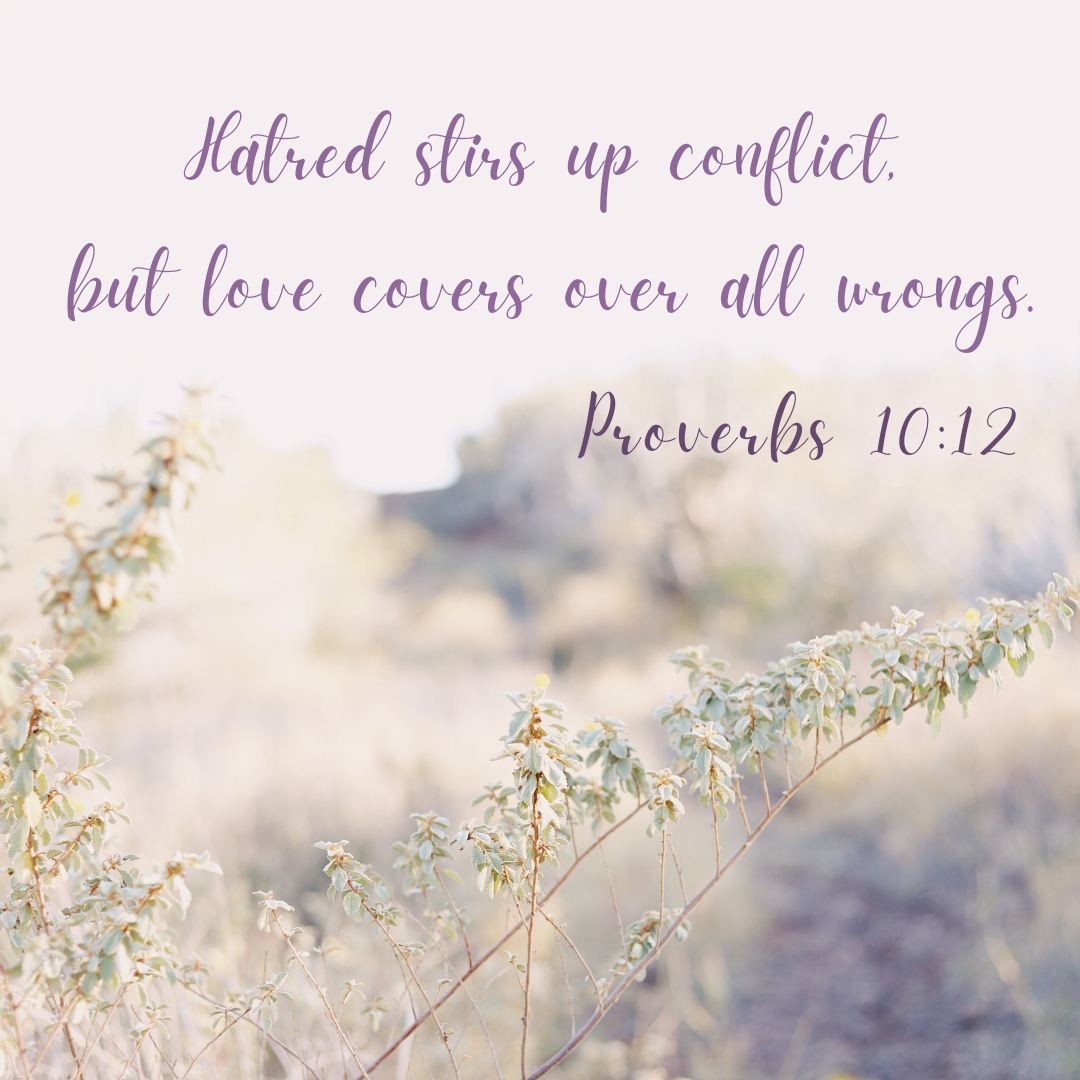 Hatred stirs up conflict, but love covers over all wrongs.

I like this verse for it’s straight forward, no nonsense point: if you’re doing things out of anger or with people who are full of hate, you know you’re in a bad place and likely going to have problems.

If you’re with loving people, doing things with love, you’re going to get through everything and it’ll be fine. All of that, I am down with and I thought that was it until I couldn’t sleep one night and kept thinking.

I also think it relates to how we live and respond to the people around us.

If someone has hurt you in the past, but you have forgiven them, then you should love them and move forward. You know that love is going to cover the past offenses. They’re covered up and they’re gone. But if you’re still holding on to anger and resentment and hate, that’s when you’re going to keep bringing that problem up. It’s like picking open a scab – it can be almost healed, then you rip it back open to all kinds of hurt. You aren’t healing or moving forward.

Is it ever possible to fully forgive and forget?

I have been hurt by people that I love and forgiven them. I can look back on the actual offenses, things I thought might actually kill me, and I feel no painful emotions. I don’t feel angry, sad or anything. It doesn’t launch me back to the raw state of being hurt . I can see it objectively like”yeah, that happened but I am ok now. We are ok now.” In those moments I pat myself on the back “yes! I got this!” I am loving them and forgiving them and I have nailed this and its great

But then, if I start to have a disagreement with them about something else, totally unrelated, and that old thing they did starts bubbling up in the back of my mind. Even though I claim and fully believe I have forgiven them and moved on – it still bounces around in my mind.  Like there is still a shred of me that cannot forgive and forget (or even forgive).

It’s confusing. I wonder in those moments, because I’m not perfect, sometimes I even bring them back up. I do not want to, on any other rational moment of the day I would never, ever do it – but then there it comes spewing out of my mouth.

So have I actually forgiven?

Am I doing what I’m supposed to as far as loving if I’m still bringing it up because I don’t think I am doing things right, that way. And then, that got me thinking deeper: I totally believe it’s possible to forgive, because I do it. I’m sitting here right now and I can think of an argument with a loved one within the last two weeks when I brought up something that happened years ago. Most days it’s something that doesn’t bother me anymore.

I mean, it changed some things, but we’re good. We worked through it. And the same thing does with other people in less personal settings. There are people I am on committees and teams with that I’ve had some serious disagreements with. I’ve said things, they’ve said things – but when I think about them now, I’m completely neutral on those incidents.

I feel like I have forgiven, and I’m not holding it over their heads, but every time I have to go near them to have a conversation about something that could even possibly end up with us not agreeing or having to work through a problem, all those old thing bubble into the back of my mind like a small nagging voice.

I generally do a really good job of not saying that or bringing them up, because I know that doesn’t do any good. Sometimes I fail but when they bubble up mostly manage to keep myself from spewing it out – but it’s hard.

So, can we actually forgive and forget? How?